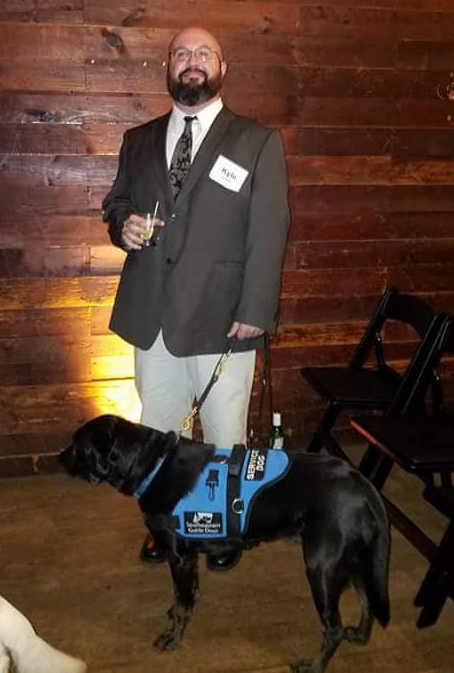 I founded 22ZERO Follow Me, Inc. in 2018 when I retired from Law Enforcement. I served six years in Law Enforcement total and 12 years in the U.S. Army.  Two of my combat tours were in the Middle East, Iraq, and Afghanistan. I received a Master’s of Public Administration from Central Michigan University while on active duty in 2010 while performing duties as a Drill Sergeant.

I have dedicated myself to building resilient minds in our women and men who serve a purpose bigger than selves and stop the onslaught of suicides associated with PTSD from combat, law enforcement, firefighting, hospital work, or any other sources of their trauma.  The treatment requires as little as an hour and a half. Read this story and contact us to find out how.

I sponsored training through 22Zero in March 2019 in Winter Haven, FL.,  with one of the breakthrough treatments for PTSD, hosted at the Caldwell Banker Building on Cypress Gardens Blvd.

Kyle came over from the West Coast of Florida with a group of veterans from Southeastern Guide Dogs. https://www.guidedogs.org/elanco/          However, Kyle ended up drawing the short straw and was selected to be the live test subject for the process. The class just watched and learned.

Star was assigned to be Kyle’s service dog, and she was simply an amazing and beautiful black lab, but she had her work cut out for her. Star’s daddy was what we say in the Army, “stuck like chuck!”  Kyle served as a Hospital Corpsman for the U.S. Navy and deployed with Combat Marines, on six occasions, three deployments to Iraq and three to Afghanistan.  I listened to Kyle’s story, and I connected with it, I felt every part of it.

When Kyle came to the training, he was living with his parents, and at 42, that had to be difficult for him, but he required a lot of care. He pretty much stayed to himself in his room and played music with Star, and forget about driving anywhere because he wouldn’t drive. Kyle rarely socialized outside of veteran circles.  Kyle’s nightmares were so bad, and this is where Star came into action.  Star’s job was to wake up Kyle to stop his night terrors.  Star was working every night, and it was probably a daunting task for her.

Kyle had numerous suicide attempts and has been hospitalized by the V.A. on multiple occasions.  The last session he did of Prolonged Exposure (P.E.) the V.A.’s go to or as they call it the gold standard for treatment, not combat veteran-friendly.   The PE nearly sent him to an early grave and sent him to long term inhouse treatment.  He was also on such a high dose of anti-depressants that the FDA contacted him to ensure he was a human being.  When Kyle sat in front of the class and began the process, he started the session with his self unit of distress scale (SUDS) a 10, on a zero to 10 range.  He was what they call a high type 2 PTSD, where he triggers but can talk about it without overwhelming expressive emotions.

When the live session began, Star laid at Kyle’s feet, waiting patiently to come to the rescue.  When Kyle initially triggered, she reacted doing everything she could to make him safe.

I sat in the back of the room anxiously watching, and with more anticipation than my favorite football team in the super bowl, I stayed on the edge of my seat. I waited patiently for that winning touchdown, the release of the trauma.  I’ve never seen a session go 75 minutes before. I was beginning to think Kyle wasn’t going to let go, and all of a sudden, it happened. It happened on one of the color rewinds, he said something he had forgotten, and when Kyle recovered the memory, you saw the color flush into his face, he smiled, and Star stood up and wagged her tail and laid right back at daddy’s feet.  That was the Hail Mary Pass, followed up with a touchdown. He let it go!

The audience was hyper-emotional as they witnessed Kyle and Star healing together.

There wasn’t a dry eye in the room, to include this former Drill Sergeant/Combat Infantryman. Please don’t tell anyone.  He let go of that trauma, and his SUDS was a 1.  Kyle then took the vest off of Star and let her run around playing with the people in the room.  Kyle, in the beginning, was not receptive to anyone.  When Gloria asked if she could pet his dog, he barked, “No, she’s working!” Gloria was the host of the training event and didn’t understand the nature of service dogs wearing their vests.  The fact Kyle let Star off-leash and with a big smile on his face said all that was needed said.

The Rest after Treatment

The next Day Kyle and Star came back to report.  Kyle couldn’t stop smiling; he finally dropped his ruck.   His ruck was heavy.  Kyle and Star both slept that night without any interruptions.  Kyle had no night terrors, nightmares, or swirling thoughts when he went home that night. How awesome is it that  Kyle and Star heal together.

A little over a year has passed, and Kyle has moved out of his parents’ home.  Kyle drives now and recently married.  Even though Kyle recently lost his father, a Vietnam Veteran, he can function in society.  Kyle, my brother, I love you, man! You are a great American!  Star, a job well done keeping your daddy alive, long enough for us to get to him.  Enjoy your sleep, Star. Now Kyle and Star can heal together.