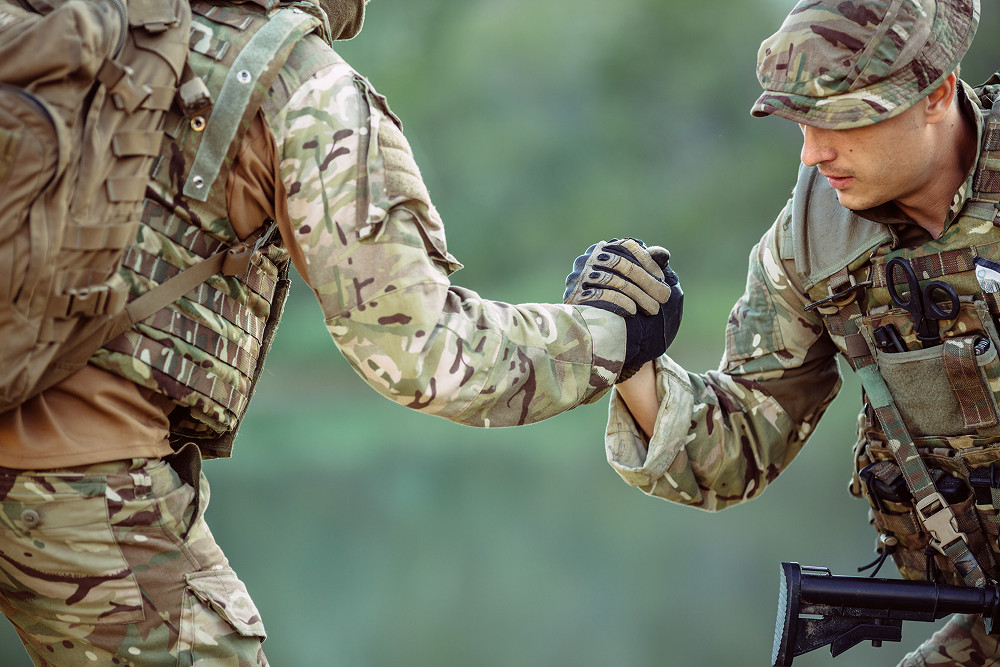 Why we do what we do

At 22Zero, we believe there’s a better way to treat PTSD and heal from trauma; we developed the Tactical Resiliency Process and shared it with the world.

The only way we can move forward on the battlefield with trauma is changing our way of thinking.  Just remember the insanity of the repetition of ineffective treatments. I will now share my road to recovery and healing.  We believe there’s a better way to heal from PTSD.

Prolonged Exposure is the gold seal treatment for PTSD  treatment with the VA.  If this were the case, it wouldn’t hospitalize veterans, causing severe emotional harm.  I speak this from experience.  The VA Psychologist told me there was nothing quite like PE. It would force you to confront the emotions and normalize the trauma.  Normalize the trauma? That, to me, was crazy talk.  You can never normalize a trauma, as there is nothing ordinary about it. He referenced 9-11 as a reason to support PE.  He said the reason why people were ok with what happened during that time was that we watched countless images, stories, and videos of the attacks. For me, the PE treatment made the wounds open wide and caused more significant numbers of nightmares and intruding thoughts.

EMDR was my second attempt at fixing my PTSD.  I sought a counselor in Lakeland, FL.  I found it quite peculiar to watch a light go from right to left and back to the right for 50 minutes while rethinking about a traumatic event. I found myself all over the place, opening one trauma, and then another.  The emotions could get intense; they called this flooding and expected as part of the therapy. All in all, I completed six-session with a counselor, and that was plenty.  No resolution, just unanswered questions.

I went through ART in Tampa, Florida, with a Psychologist, and I must say I was very hopeful.  It was less intrusive then EMDR but very similar in the counselor uses his hand to get eye movement.  Still, I didn’t particularly appreciate having to think about the trauma, it was uncomfortable, but I feel this is a better means of working through trauma.  EMDR had me all over the place, while ART appeared to have me stay focused on the single event.  I did find relief, albeit only for a single event.  When I started the nonprofit, I was looking for answers.  So far, ART was in the lead on my journey, though I continued looking for better ways.

I flew down a couple of Soldiers I had worked with and their spouses, and we all attended the Veterans Alternative together in Holiday, Florida.  They used ART as a primary means of treatment; their founder Brian Anderson found it extremely beneficial, and he credited it for saving his life.  They had two therapists at the time, and that’s when we realized not all therapists are created equal.  Batia Gold was one of the therapists, and she was terrific.  I will not name the other therapist because, well, she was not quite at Batia’s level.  We know this because she called out sick two of the days, and the three that shifted to Batia, including my wife said, they were day and night difference.

Their program was good, and we had a blast, just making human connections and learning some other skills to help guide the process of maneuvering PTSD and triggers.  They used Eye Rest Yoga, which I considered more of a nap and art therapy not to be confused with ART therapy and music therapy. Five days came and went, and we all went back to our lives.

The work I used ART with was the death of one of my Soldiers that I felt responsible.  I thought I handled it, but I later had to revisit treatment with another method to put it to bed finally.  I also worked on childhood trauma with ART at the Veterans Alternative; I didn’t find the resolution I was looking for but more to follow; hope is around the corner.

Still, as I looked for newer, better treatments, I found another therapy there’s a better way—the Reconsolidation of Traumatic Memories (RTM) Protocol.

In September 2018, I found myself in Albuquerque, NM, examining a potential breakthrough treatment for PTSD significantly higher than the others.  Ninety-two percent is successful at eliminating the symptoms associated with PTSD.  I sat through the first day of the training and found myself perplexed.  The claims were pretty unbelievable.   I still had a lot of stuff I wanted to work on from an emotional perspective.  I had years and years of trauma I wanted to leave behind.

I told the lead trainer Allen that I wanted to experience the process if I recommended it to others.  I honestly didn’t buy their claims.  He convinced me to sit in the front of the class of licensed mental health counselors and experience it live, right then, right there.  Forty-five minutes later, I was confused and perplexed.  I believe I asked the trainer, “What kind of Jedi stuff is this?” I was officially a believer.

For the next year and a half, I was doing everything I could to get this new treatment mainstream.   We paid for training; we funded counselors, we raised money for the Research and Recognition Project.  The relationship was proving beneficial for them, quite helpful.  We wanted to bring the process to our nonprofit with peer support; this was a very long road.   It took a year of convincing and loopholes in the laws of the state of Florida that allowed our first group of peer coaches.

Too Expensive for Us

The cost was killing us; initially, the training was $2500 (worth it totally but too high for most) per counselor, then a day was shaved off the training, and it dropped to $1995.  Ultimately the veteran and nonprofit rates were established at $1495.  It seemed everything we were doing from this point forward was raising money for another organization.  Yes, they had the answer to PTSD for most people.  I went through 5 more sessions of treatment and rid myself of all past trauma, including childhood trauma.   We had to believe there’s a better way of controlling costs.

I even used the RTM Protocol on an event I thought was cleared by ART, the death of Doug Cordo.  I flew Doug’s mom to Florida to go through RTM and found the nightmares back; my fear was seeing his mom. I ran a session of RTM, the morning I was set to see his mom, and finally, I was good to go.

We were establishing relationships with Dr. Bourke, hoping to get our own 22Zero  trainers for the RTM Protocol to limit our costs and even split profits with R & R as we moved into training first responders.  The RTM Protocol is a better way, and we knew it.  We did come to terms with a split of net profits; however, we couldn’t get a contract.  Initially, it was a memorandum of understanding sent to us by their attorney of record and a board member Robert Dinardo.  The issue we kept running into was R & R was developing a for-profit arm to their organization.  Every time they had an investor on the hook, we took a back seat.  It was incredibly frustrating.  Here is the solution for PTSD, we were raising money for their organization and the on the ground veteran and first responder organization carrying their water when it came to pushing training and funding counselors.

I read all of the research papers and took training in other Neuro-Linguistic Programming training, Core Transformations, etc. I did my research into the RTM Protocol and found a wealth of knowledge.  I began developing our process with Dr.  Royster; she joined our board of Directors.  Dr. Royster is an Industrial and Organizational Psychologists and Air Force veteran, to boot.  We developed a process we could train veterans and streamlined the process.

We disconnected from R & R for personal reasons. We had to believe there’s a better way, and we had to carry our water.  We needed to move farther and faster than they allowed us to do as we were attached to their mission, dependent on them.  Their mission, which is not our mission, must continue but without us.  I have much gratitude for Dr. Bourke for changing my paradigm.  That shift had opened doors before I never thought possible.

We developed the model for TRP and put it into research.  We have to validate the process.  Initially, I was reluctant because I knew the process worked but Dr. Martha Corvea, retired VA clinical Psychologist, Dr. Janell Royster, and Dr. Michael Maisano,  a psychologist at Arizona State University, convinced me of the value of the research. The accumulation of the testing the model was with more than 100 clients, proving with a 98.4 percent success rate, and now there is a better way.  Our differing approach is client-centered and uses zero trauma content.  I believe our process will prove more successful because of not having to share content.  We can now conduct other studies to replicate the success, evaluated by an Independent Review Board (IRB).  We will scientifically validate our process.

One of the Soldiers we brought down to receive ART was doing fantastic for close to a year, then everything came back.  I got on a Facetime call and ran him through our process.  He went from a subjective unit of Distress (SUDs) of a ten on a zero-ten scale to a zero. He went from being an emotional wreck to laughing.  We did three more sessions over the next few days, and now he’s getting trained to do our process as a peer coach, soon to be armed with the tools to end PTSD.

With our process, we can control our costs in every way.  We can even raise revenue on our own without having to beg from donors.  We now have active law enforcement agencies paying for training to bring this to their peer support groups. What’s happening since we went out on our own is astounding.  We stepped out in faith and brought this process to the masses; we are challenging the status quo and healing trauma rapidly.  We will not relent, and we will heal our heroes because it is the right thing.

Our contribution is to America’s sons and daughters, who put a uniform on for a purpose much more significant than themselves; we are getting them back on their path. The path meant to live.

If you go to our website memorial page, you will see what we are trying to prevent.  https://22zero.org/in-memory/

The Decision is Yours

At 22Zero, our best practice is the Tactical Resiliency Process (TRP); however, we are partial because we created it; it truly is a better way.  The decision ultimately lies within you.  We put some links in this article to the other organizations and therapies to research and make an informed decision on your own—my personal why is believing there’s a better way and share it. It’s why I have been searching for answers for so long.

I would rate the treatments here in the blog in this order: